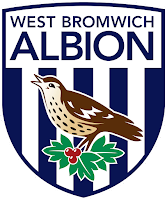 West Bromwich Albion FC was formed in 1878 as the Strollers and up until their move to their current home at the Hawthorns in 1900, they had played at 5 different sites.

Originally formed by workers from George Salter’s Spring Works, West Bromwich Albion's first ground was at Coopers Hill. This was situated in the town between Walsall Street and Beeches Road and is now the site of St Philip’s Church.

Between 1879 and 1881 they also played some matches at Dartmouth Park, alternating with Cooper’s Hill. At the time the Globe Inn public house on Reform Street was used for changing room facilities.

For one season 1881-1882, WBA moved to Bunn’s Field, which also went under the name of the Birches. This was to be a distinct improvement on their previous facilities being an enclosed ground, enabling the club to charge an entrance fee for the first time. The Birches held a capacity crowd of between 1500 and 2000.

Towards the end of the 19th century, the popularity of football was ever growing and at the end of 1882 it was obvious that the club needed to find more substantial premises. West Bromwich Dartmouth Cricket Club was approached with a request to rent their Four Acres ground and here the Albion stayed for 3 further years, but were only allowed to play football there on Saturdays and Mondays.

During this tenancy, their record attendance was 16,393 for an FA Cup tie against Blackburn, but with the further popularity increase in football throughout the late 19th century, very soon they were looking for an even larger facility. Four Acres was located at what is now Park Crescent, just off Seagar Street.

In 1885, the Albion moved to a ground in Stoney Lane, where they stayed for 15 years. This era turned out to be the most successful period in the clubs' history where they managed to win the FA Cup twice and were also beaten finalists on another 3 occasions. Here they built a large wooden grandstand that affectionately went by the name of “Noah’s Ark” which seated 2000 people.

The record attendance at Stoney Lane was 20,977, set in 1895 for a cup tie against local rivals Wolverhampton Wanderers, which the Albion won 1-0. In April 1900, the club played their last match here before moving to The Hawthorns which has been their home ever since.

Their previous 5 homes were close to the centre of West Bromwich, but in order to gain more space, they signed an initial 14 year lease with the Sandwell Park Colliery Company, for a site located on the outskirts of the town, skirting the borders with Handsworth (it can actually be argued, that the ground is not in West Bromwich at all).

This new site was named after the many hawthorn bushes that had to be cleared when building was taking place and they even had to ford a stream that ran across the grounds to create a pitch.

The transformation to a football ground took place in months and in the first match in September 1900, they drew with Derby County. For the move, “Noah’s Ark” had been taken down at Stoney Lane and re-erected at the Hawthorns, but sadly it only lasted another 4 years before being burned down, ironically on Bonfire night (5th November 1904).


At the end of their first season at the new ground however, the club suffered the indignity of being relegated from the 1st Division of the Football League for the first time.

The Hawthorns, having a record attendance of 64,815 set in March 1937 for a cup tie against Arsenal, has changed beyond all recognition over the years.

Now with an all-seated capacity of 26,500, it is a first class stadium for a club now fully established back in the Premier League of English football.

The stadium holds the distinction of being at the highest altitude of any English football league ground at 551 feet above sea level.

In the early 1920’s, it staged 2 England full internationals and was used for athletics meetings in its early years. There was also a cricket match held there in the late 1970's between India and Pakistan.