Founded as St Luke's in 1877, after a group of pupils at St Luke's school in Blakenhall were given a football by their headmaster. In 1879, they merged with a local cricket and football club known as the Wanderers, becoming Wolverhampton Wanderers.

Upon formation, the club were initially given the use of two fields to play on. John Harper's field and Windmill field. Both of these were to be found off Lower Villiers Street in Blakenhall.

In 1881, they moved to a site on Dudley Road. No sign of this ground remains but there is a road nearby called Wanderers Avenue.

In 1889, they moved to their current home - Molineux. The name originates from Benjamin Molineux who had previously built his home on the site.

Built in 1720, Molineux House as it became known, consisted of only what is now the lower floors of the front half of the main block. Benjamin, a local ironmaster and banker, bought the property in 1740.

It boasted extensive walled gardens, running down the hill, to the site of the football ground to be built later. Around 1871, the building became the Molineux Hotel. After having many owners (including at one stage, the football club, who submitted plans to demolish it), the hotel fell into disrepair, eventually re-opening in 2009 under the name of the Molineux Hotel Building full story available by clicking HERE

Back in 1889, Wolves initially rented the site from the then owners, the Northampton Brewery. After spending time converting the site into a sports arena, the first match was played on 7th September winning 2-0 against Notts County in front of 4,000 people.

Renown for being surrounded by dirt banks in its early days, Molineux underwent extensive renovation in the 1920’s and 30’s to become a worthy stadium for a club famous throughout football.


The takeover of the club in 1990 by Sir Jack Hayward paved the way for re-development. The old stadium had been looking quite worn and shabby and the onset of legislation following the Taylor report requiring all Premiership and Division One stadia, to be all-seated, meant the time was ideal for renovation.

The North Bank was demolished in October 1991 and by the following summer, the Stan Cullis stand was completed in time for the new season. Next to go was the Waterloo Road Stand which was replaced by the Billy Wright stand a few months later. In November 1993, the Jack Harris stand replaced the previously colossal South Bank.

At an estimated cost of £20 million, the newly refurbished stadium was officially opened on 7th December 1993 with a friendly match against Hungarian team, Honvéd.
At  that time the capacity was 29,396 but now it has decreased slightly to 29,303. Plans were unveiled in 2008 by new chairman, Steve Morgan to increase the limit to 40,000.


Footage of the Queen's visit to Molineux in 1962 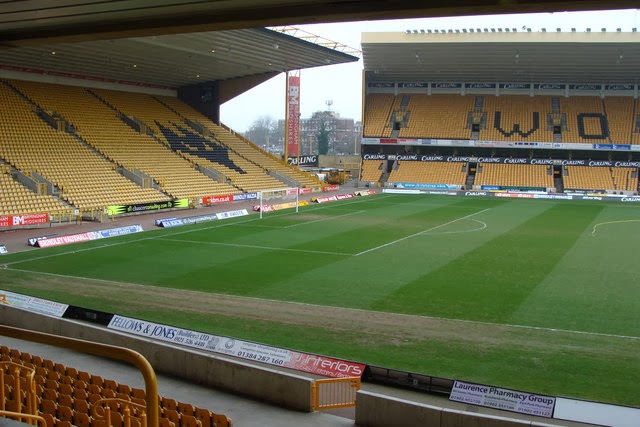