The Arsenal Football Club that we know today has come a long way from the club originally formed in 1886. They started out playing under the name of Dial Square, formed by workers at the Royal Arsenal in Woolwich, South-East London. Shortly afterwards they were renamed Royal Arsenal.

After turning professional in 1891, they again changed their name to Woolwich Arsenal and 2 years later became the first southern club to become members of the Football League.

Initially playing on a field located in the Isle of Dogs and using pitches on Plumstead Common and the Sportsman Ground on Plumstead Marshes, the club soon moved into an adjacent field known as the Manor Field.

Becoming the Manor Ground, it was renowned for being notoriously muddy and had the feature of an open sewer running along the southern side of the pitch. Being not much more than a pig field, the ground supported the most basic of playing and spectator facilities. It was soon clear however, that a new home would have to be found to accommodate the 1,000 or so people regularly attending home matches at the venue.

In 1890, the club moved across the road to the Invicta Ground where they stayed for 3 years. Being equipped with a stand, a row of terracing and changing rooms, the ground was a significant step up from their previous tenancy at the Manor Ground.

Upon joining the Football League in 1893, the initial plan was to continue to use the Invicta Ground for their home matches, until the landlord, George Weaver (a mineral water magnate), decided to try and cash in on the club’s rise in fortunes and increase the annual rent from £200 to £350. The club was unable to afford this rise and promptly returned to their previous home at the Manor Ground.

The Invicta Ground is now covered by housing around the areas of Mineral Street and Hector Street. Some of the old terracing can still be seen in the gardens of houses located in Hector Street.

Upon the club’s return to the Manor Ground, they were able to purchase the ground by making available a share issue and then started the task to build a main stand and banks of terracing. Here they stayed for the next 20 years, except for a period in 1895 when the ground was closed for 5 weeks after crowd trouble at a match against Burton Wanderers.

In 1910, Woolwich Arsenal faced bankruptcy and was bought out by Fulham owner Sir Henry Norris (a property magnate). After a failed attempt to merge the two clubs, Norris successfully managed to move the club right across the city to North London in 1913, where they set up home at the greatly loved Arsenal Stadium in Highbury.


Because of their re-location, the club dropped the Woolwich prefix from their name, becoming Arsenal FC. 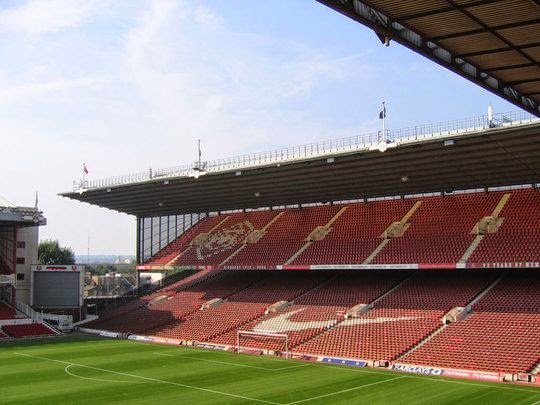 Today the Manor Ground is covered by an industrial estate, the area of the old ground being in the vicinity of Nathan Way, Griffin Manor Way and Hadden Road.

Widely thought of and known as Highbury, Arsenal Stadium was home to the club from September 1913 until May 2006. Designed and built by legendary football stadium architect Archibald Leitch, it was originally made up with a main stand surrounded by 3 banks of terracing.

In its hey-day, it held a capacity of up to 60,000 spectators. With many facelifts over the years, the ground could still accommodate 57,000 people into the early 1990’s, but with the onset of the Taylor Report and all-seated stadia, this figure dropped considerably toward the onset of the new millennium.

In 2000, a proposal was made to build a new 60,000+ capacity stadium in Ashburton Grove, located less than a mile away from Highbury and after a few hiccoughs along the way, the new ground was ready for use at the start of the 2006-7 season. 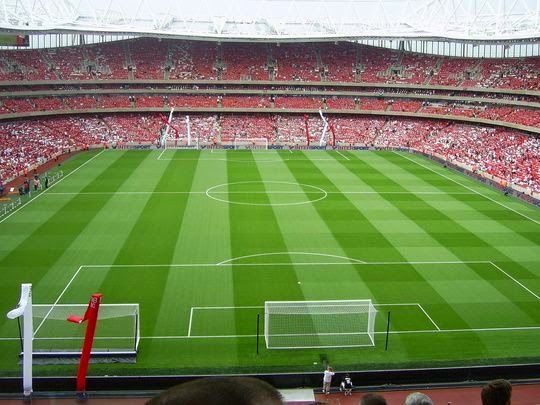 Named after the airline company, the Emirates Stadium is the 5th largest football stadium in the United Kingdom and the 3rd largest sports ground in London (after Wembley and Twickenham).

Officially opened by Prince Philip, Duke of Edinburgh in October 2006, the whole project cost upwards of £470 million of which the club offset some of the bank loans used by issuing bonds.

Now owning one of the most impressive Premier League grounds with facilities to match, Arsenal FC have moved on a long way since their humble origin on the other side of the River Thames down in South-East London.

The hugely impressive Emirates Stadium (Image via Wikipedia)
Posted by Uncle Tatty at 17:20