In their 115 year existence, Cardiff City Football Club has played at three different grounds within the confines of the Welsh capital city. 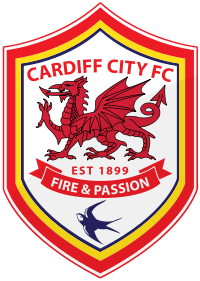 Cardiff City Football Club was formed in 1899 as the Riverside Association Football Club, predominantly as a means of keeping the playing members of their Cricket Club fit during the winter months with what was classed as “healthy exercise.”

Their early fixtures were made up from playing friendly games against other local clubs, generally at the Sophia Gardens Recreation Ground, but soon enough after formation (in 1900) they joined the Cardiff and District League starting out on their competitive future.

Their home at Sophia Gardens was shared along with many other clubs in the Welsh capital who used the facilities for cricket in the summer and either football or rugby during the winter months.

In 1902 they merged with Riverside Albion and once Cardiff was granted city status in 1905, the club put in a request to change their name to Cardiff City. This was denied however as it was deemed that they were not playing at a high enough level to warrant the change or honour.

In 1907 the club moved to the South Wales Amateur League and soon after their name change request was duly granted.
Local interest in the club soon began to rise, to the degree that they had the opportunity to join the newly formed Southern League Second Division, but they had to decline due to the lack of facilities available at their Sophia Gardens home.

Located next to the River Taff in the centre of the city, Sophia Gardens is now best known as the home to Glamorgan County Cricket Club and is where the SWALEC Stadium and Sport Wales National centre are both located.
Ninian Park – Early Years

In an attempt to raise funds to enable a move away from Sophia Gardens, the club arranged lucrative friendly matches with the likes of Crystal Palace, Bristol City and Middlesbrough as opponents and after a terrific local response Bartley Wilson began negotiations with the Bute Estate who owned the majority of the area in and around Cardiff. The Bute Estate offered a plot of waste land adjacent to Sloper Road and with the assistance of the Cardiff Corporation, Ninian Park came into existence.


Originally intended to be called Sloper Park, the ground was eventually named after Lt.-Col. Lord Ninian Edward Crichton-Stuart, who offered financial assistance with the move from the Riverside.

The new stadium was opened in 1910 and soon after Cardiff City was in a position to accept the offer of membership from the Southern League.

Being located on a former rubbish dump, in its early years a few players suffered injuries by pieces of glass and other items protruding up through the grass. However the biggest shock of all happened on a very wet and muddy day when allegedly an old bedstead suddenly appeared in one of the goalmouths.

The Grandstand at Ninian Park 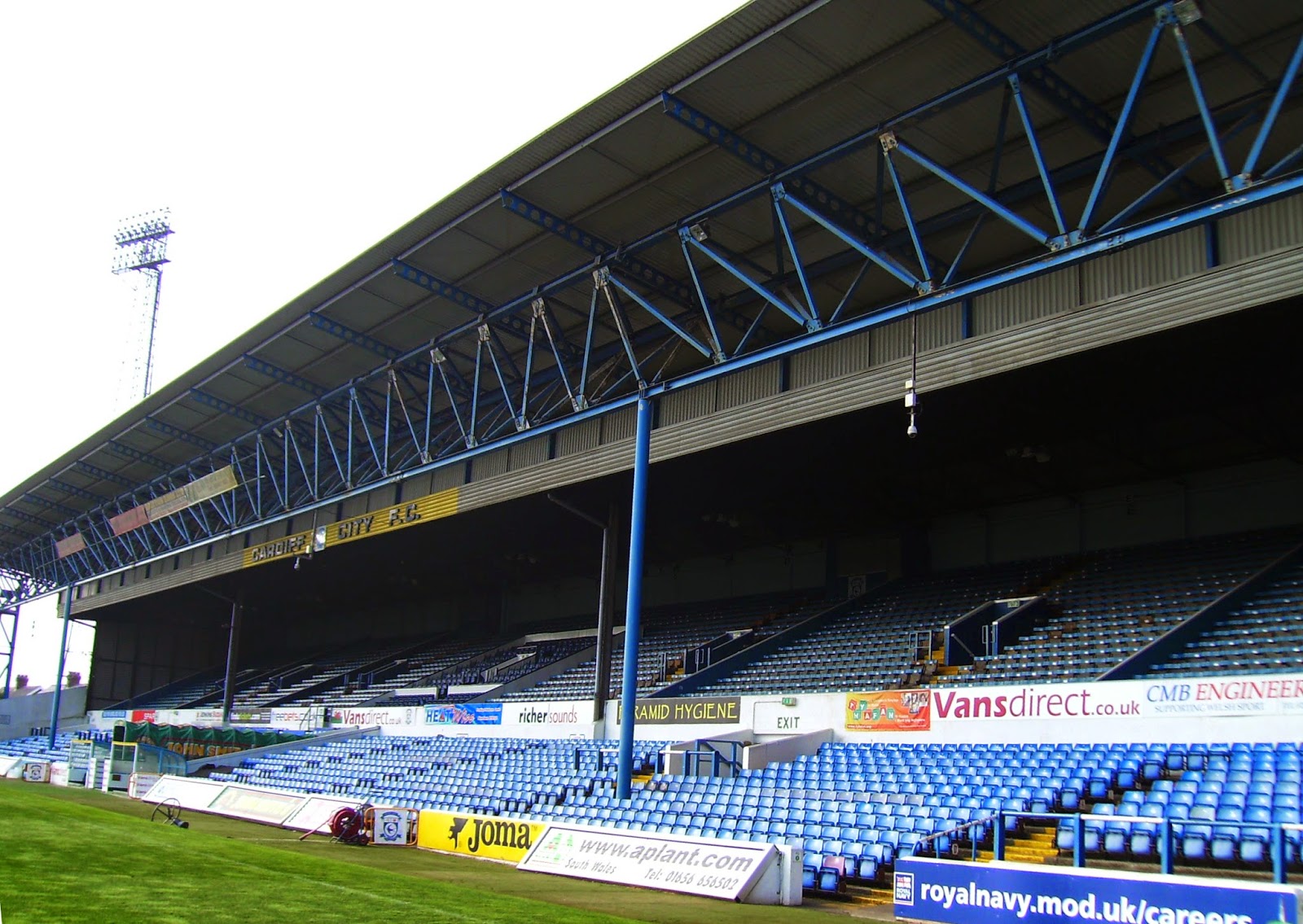 Affectionately known as the “Old Lady” and the “Bearpit”, in its later years the stadium featured four stands: the Spar Family stand (formerly known as the Canton End), the John Smith’s Grange End, the Popular Bank (also known as the “Bob Bank”) and the main Grandstand which housed the dressing rooms etc.

In 1946/7 a supporter fell through the original roof of the Grange End during a game against Bristol City. The hole in the roof actually remained until the stand was demolished in the late 1970s.
Over the years, Ninian Park became the premier football ground in Wales, hosting many international matches along with numerous other events. The ground also staged the show-jumping events for the 1958 British Empire and Commonwealth Games based in Cardiff.
Bob Marley played a concert at the stadium in 1976 which took place in a torrential downpour, while six years later Pope John Paul II held a rally during his tour of the UK.

It was also used for Rugby League internationals and as the home for the Cardiff City Blue Dragons RLFC between 1981-84.

Its record crowd was achieved in October 1959 when 62,634 spectators attended a Wales v England international match. At the end of its use, the capacity was approx 22,000.

As is/was the case in many UK football stadia, the ground was served by its own railway station which was based on the Cardiff City line. 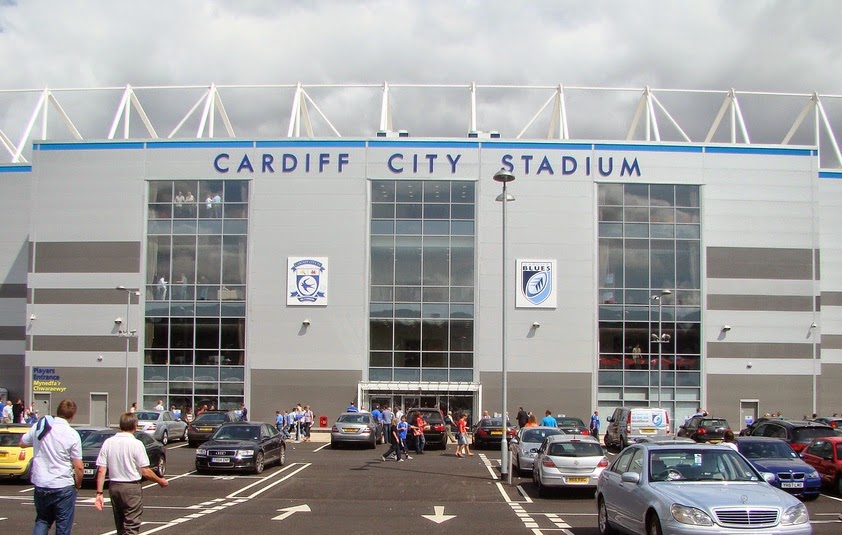 After 99 years, Cardiff City left Ninian Park and moved the short distance of approx a quarter of a mile, to the new Cardiff City Stadium.


Located on the site of the old Cardiff (Leckwith Athletics) Stadium, it was opened in July 2009. With a current capacity in excess of 26,000 spectators, foundations are in place to easily increase this figure should the need ever arise.

The impressive stadium is fully enclosed with three similar one-tiered sides along with the Grandstand that has a second level that overlaps the rear of the lower tier. Outside of the stadium are the gates from Ninian Park and beside these gates is a plaque commemorating legendary former Celtic and Scotland manager Jock Stein, who passed away at the old ground in 1985 after a Wales v Scotland international fixture.

After winning the Football League Championship in 2012/13, Cardiff City gained promotion and started the new season as members of The Premier League. It was the first time they had played in the top flight since the early 1960s, but sadly was short lived and relegation found them back in the Championship.
However the club now has a 21st century style home which befits their ambitions and they look forward to future success.