One of the twelve founder members, they have competed in every season of the English Football League. They are currently down at the 2nd level and in the process of mounting another attempt to return to the Premier League. 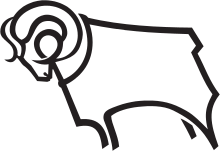 Derby County FC came into existence in 1884 as a branch of the Derbyshire County Cricket Club. The intention was to give the players and supporters an interest in the winter months i.e. out of the cricket season. The original plan was to name the club Derbyshire County, but the county football association objected, claiming the name was too long.

Their initial home was at the cricket club’s Racecourse Ground, where they played a number of friendly fixtures and were entered into the FA Cup. A victory over Aston Villa in the 1885 FA Cup stood the club in good stead, helping them to attract a better class of opposition for their friendly matches. On the back of this, they were invited to be members of the inaugural Football League in 1888, where their first match was won 6-3, away at Bolton Wanderers, coming back from a 3-0 deficit. In the first season the club ended in 10th position out of 12. The ground actually holds the distinction of being the first outside of London to host an FA Cup final (1886 replay) and also hosted a full England international.
In 1895 because of disputes over fixtures with the cricket club, they moved away from the County cricket ground to the Baseball Ground (so called as it was previously used for that sport). The club had previously used the ground in the 1891-2 season for a match against Sunderland when, because of a fixture clash, they were unable to play at the Racecourse Ground. Baseball was very popular in England in the 19th century but with football becoming the spectator sport of the masses, its popularity had waned somewhat.

The club were to stay at the Baseball Ground for 102 years despite having opportunities to move away both in the 1920’s and again in the 1940’s. Here they adopted their traditional back and white colours and the nickname “the Rams”. The club held strong links with the First Regiment of the Derby Militia who had a ram as their mascot and sang “The Derby Ram” as the regimental song. From that period, up until the 2nd World War, the club had limited success. They ended up as runners up in the League in 1896 and on 2 further occasions in the 20’s and 30’s. They also lost the FA Cup finals of 1898, 1899 and 1903. The club was closed at the outset of the war, starting up again in the early 1940’s and in 1946 won their first major trophy, beating Charlton Athletic 4-1 in the FA Cup final.

In 1967, the legendary management team of Brian Clough and Peter Taylor took the helm at the BBG and within 2 years had guided the club back to the First Division. 3 years after that, the pair then took the club to their first ever Championship victory. The following season, they made it through to the semi-final of the European Cup, losing to Juventus in a tie which became notorious, not so much for the football played, but because of fixing allegations made against the Italian giants.

In 1997 after rejecting 2 other sites, the club finally moved away from the BBG to a brand new home at Pride Park Stadium (although reserve matches continued to be played at the BBG until as late as 2003). In May 2001, the ground hosted an England international match against Mexico, giving the club the honour of being the only club to have had 3 of their home grounds hold international matches. 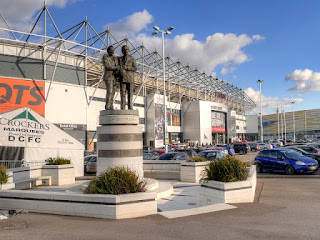 is a very passionate footballing town with a strong and very loyal following of which would be an asset to any club chasing promotion to the top flight.
Posted by Uncle Tatty at 20:46