Ipswich Town Football Club sometimes known as the Blues, Town and more recently, the Tractor Boys, are a Football League Championship side. With a long history and first class reputation, they find themselves in the throws of another push for promotion, back into the Premier League.

The club was founded as far back as 1878, but did not turn professional until 58 years later in 1936. Initially formed as an amateur side, the original club name until 1888 was Ipswich AFC, when a merger with the Ipswich Rugby Club brought into existence Ipswich Town FC.

In the early days, they competed in and won numerous local cup competitions, such as the Suffolk Challenge Cup and the Suffolk Senior Cup. They joined the Southern Amateur League in 1907, where they were league champions on 4 occasions, becoming founder members of the Eastern Counties League in 1935. A year later, when turning professional, they joined the Southern League and were Champions in their first season and 3rd in the following campaign. Then came their subsequent election to the Football League in 1938.

Between 1878 and 1884, Town played their home matches at two grounds in the town, namely Broom Hill and Brooks Hall. Broom Hill, now better known as Broomhill Park, was owned at the time by George Sherrington, who was a driving force behind the club in its early years and both he and his brother played for the club in the 1870/80’s. After 1884, when Ipswich Town moved to Portman Road, the ground was used by the rugby club. 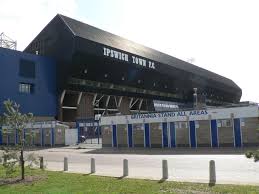 Although moving to Portman Road in 1884, the main ground developments did not start until 1901 and at that time, a tobacco processing plant was to be found bordering the ground. A wooden stand was built on the Portman Road side of the ground in 1905, only for the roof to blow off 6 years later during a storm. After turning professional in 1936, a terrace was built at the north end of the ground, to be followed by a further terrace at the southern end a year later. 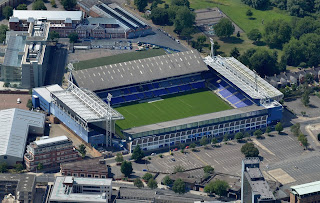 By 1954, all the sides were terraced and 5 years later, the club installed their first floodlights. In 1971, a two tiered stand was built on the Portman Road side of the pitch to replace the existing terraces. In 1990, so as to comply with the recommendations of the Taylor Report, the ground was converted into an all seated stadium with a capacity to hold 22,600.

The Ramsey and Robson Eras

The most successful periods in the clubs playing history were during the management periods of Sir Alf Ramsey and Sir Bobby Robson. Ramsey was instrumental in Ipswich Towns only Football League Championship in 1961-2 becoming a legendary figure and national hero when moving on to manage England to World Cup glory in 1966.

Both great managers are commemorated by statues at the stadium .