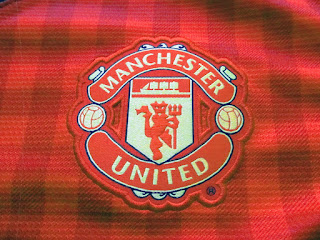 Now, possibly the widest supported football club in the world, Premier League, Manchester United or the Red Devils as they are affectionately referred to, have come a long way from their humble beginnings.

Formed as a section of works team in the Lancashire and Yorkshire Railway, the club has become one of the most successful in the English game, having won numerous League titles, FA Cups and the Champions League/European Cup on 3 occasions.

Manchester United was founded as Newton Heath LYR Football Club in 1878. Formed by the Carriage and Wagon section of the Lancashire and Yorkshire Railway depot at Newton Heath, their initial matches were against other sections and departments of the railway. In the early days, the club actively looked for quality footballers and offered them jobs on the railway so they could join the ranks and improve the team.

The first matches were played on a field in North Road, located close to the railway yard in Newton Heath. Even though holding a capacity of 12,000 it was thought by the officials of the club as inadequate to join the Football League, so a period of expansion was undertaken. In 1891, two grandstands, both able to hold 1,000 people were purchased, increasing the grounds capacity to an approximate 15,000. Two years later however, the club were evicted from the ground at North Road by their landlords, the Manchester Deans and Canons, who considered it inappropriate for a football club to charge admission to church land.

The site of Manchester United’s first ground at , now renamed , after use as a school playing field, is now the home of offices belonging to Japanese IT products and services company, Fujitsu

After eviction, the club were soon able to locate a site in Bank Street, Clayton. Again it was a field with no stands or barely any facilities for players or fans alike, but by the start of the 1893-4 season, two stands had been hastily built. One covered the whole of one side of the ground whilst the other behind the goal at the end. At the other, Clayton end, they built a high bank, enabling large crowds to be catered for. On 1st September of that year, Newton Heath played their 1st home match at the ground, winning 3-2 against Burnley.

It only took another 3 weeks before the remaining stands were in place, just in time for the home match against Nottingham Forest. With purchases of stands from other clubs, such as the Broughton Rangers Rugby League Club, by the end of the century, Bank Street had become quite a substantial stadium.

The club then took a financial downturn, causing bailiffs to enforce the temporary closure of the stadium. However, 4 local businessmen came to the rescue and took over the clubs debts. At this time the green and gold shirts, which had been previously worn, were ditched in favour of the now familiar red and white and the club changed its name to Manchester United.

After substantial investment, the club was able to continue development at Bank Street and by 1906 the ground was covered on all 4 sides, holding a capacity in the region of 50,000. Even so, after winning the Football League in 1908, it was decided that Bank Street, surrounded by factories and more often than not polluted by clouds of smoke, was still too restrictive for the club’s further ambitions and the search for a new home began.

In 2002, Manchester hosted the Commonwealth games and one of the stadia built for that event was the Manchester Velodrome. The car park for this indoor cycling track is located on the very site of the old stadium at The site is also very close to ’s Etihad stadium (the Commonwealth Games main stadium). 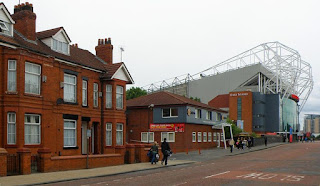 In 1909, Manchester United made a purchase of some land lying close to the Bridgwater Canal, in an area south-west of the city centre, for a sum of £60,000. Here at Old Trafford, they employed the services of the now legendary football stadium architect, Archibald Leitch, to design and oversee the building of the ground. The original plan was to hold a capacity of 100,000, but because of financial constraints, this was lowered by 20,000 to 80,000.

The first match took place in February 1910 where the hosts were beaten by the odd goal in 7 by great rivals Liverpool. It was commented by a local journalist, that as a football ground, it was unrivalled in the world and an honour to the city of Manchester.

Old Trafford has undergone extensive rebuilding over the years, but is still one of the top football stadia in England, much befitting, arguably one of the most successful clubs in world footballing history.

Not altogether bad for a railway works team!
Posted by Uncle Tatty at 15:48