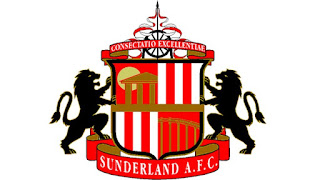 Sunderland football has gone a long way since the formation of the club back in 1879. 131 years and seven grounds later, they are back, arguably where they belong, in the top flight of English football. This statement however would be vehemently disputed by followers of their local rivals Newcastle United.

Sunderland AFC was founded in 1879 by a local teacher, James Allan and was initially known as the Sunderland District & Teachers Association Football Club. The name changed to the Sunderland Association Football Club 2 years later, when other professions were allowed to join This allowed a larger player pool and improved finances. Allan however grew dissatisfied with the club’s changing attitude to professionalism and left to form a rival club, Sunderland Albion, and the two clubs were rivals on and off the field until Albion folded in 1892.

Their first ground from 1879 was at Blue House Field in Hendon. On the eastern side of the city, it was located very close to Hendon Board School where the club was formed. At that time the club paid a rent of £10 for the ground use.

Part of the site is now the Raich Carter Sports Centre, named after one of the club’s great former players who captained the club to League Championship success in 1936.

In 1882, the club moved to Groves Field in Ashbrooke for one season, before moving to the Horatio Stadium in the district of Roker. In what then was thought of as the tourist section of the city, the club had moved for the first time to a location north of the river Wear in an area dominated by terraced housing. But after only one season, the club moved on to Abbs Field in Fulwell.

In what is now a fairly affluent area in the northern parts of the city, this was the first ground where the club was able to charge admission to their matches. But again, Sunderland football which was getting a nomadic reputation, was to find a new home only two years later.

In 1886, they moved to a site in Newcastle Road. This was to be the stadium where they played when entering the Football League in 1890 and for a short while had the honour of being the largest in the United Kingdom when a crowd of 21,000 turned out for a cup tie against Everton in 1891.

Towards the end of the 19th century, it was evident that the club needed an even larger stadium. Football was entering its boom period and the old Newcastle Road stadium was certainly not sufficient to cope with the mass crowds that were prominent at Football stadia at that time.

In 1898, the club returned to the Roker area. It was negotiated with a local land owner, Mr Tennant, to buy a plot of farmland. The only stipulation to the deal was that they would have to build a house on the land as well as a football stadium. Until such a time as the house was built, they would remain to pay rent on the site.

Within a year of the site being bought the ground was ready, with wooden stands surrounding the pitch which only took 3 months to construct. The turf for the pitch was brought over from Ireland and the ground hosted its initial match, a friendly against Liverpool.

By 1913, the stadiums capacity had increased to approx. 50,000 In 1929, the old wooden grandstand was replaced by an Archibald Leitch designed stand which nearly bankrupted the club. The capacity was up to 60,000 but it was not unknown for this to rise by another 15,000 when a suitably attractive fixture brought in the masses. 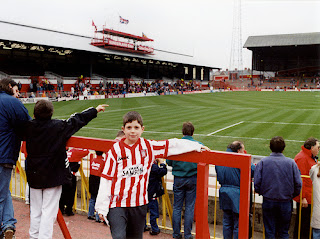 A bomb fell on the stadium during the war causing a Police casualty, when an officer patrolling on his beat was walking past at the time. In 1952, the ground became the 2nd in England to be fitted with floodlights (only beaten by Arsenal at Highbury Stadium). Improvements were also made to the stadium in readiness for its use in the World Cup staged in 1966.

In the early part of the 1990’s when the Taylor Report suggested all-seated stadia was the future for English football, it was decided that Roker Park was too confined to contain the size of all-seated attendance that would be expected for a Premier League club. Being surrounded by housing on all sides, a further decision was made to relocate and build a new arena. The site of Roker Park eventually became a housing estate with such apt road names as Promotion Close, Clockstand Close, Goalmouth Close, Midfield Drive, Turnstile Mews and Roker Park Close.

The Stadium of Light

The Sunderland Stadium of Light, built on the site of the old Wearmouth Colliery was in fact the 2nd choice of location for a new stadium. The original plan was to build on a plot adjacent to the Nissan Car plant in the city. The Japanese Car giant however objected to this proposal and the club had to think again.

The next plan was on land which bordered onto the north bank of the River Wear which was only a few hundred yards away from Roker Park. The all clear was given by the Tyne and Wear Development Corporation and the new stadium was ready for use in 1997. 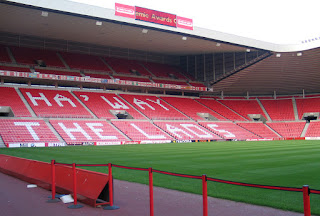 The Stadium of Light has a capacity of 49,000 which makes it the 5th largest ground in England. It has hosted 2 England full internationals during the period when Wembley was being rebuilt and was been proposed as one of the venues for the England World Cup Finals bid in 2018.

The name Stadium of Light comes from a reference to a miner’s lamp, which is a fitting tribute to the sites former use and to all who were employed there.
Posted by Uncle Tatty at 18:34