Scottish architect, Archibald Leitch is famous for designing football stadia throughout the United Kingdom and Ireland. 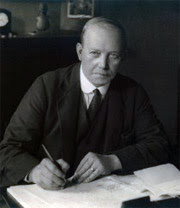 Previously successful factory architect in and around his home Scottish city of Glasgow, Archibald Leitch was commissioned in March 1899 to build Ibrox Park, the new home ground of Glasgow Rangers Football Club. Opened in 1900, it was at the time, the largest ever purpose built football stadium in the world. Leitch’s ground designs at numerous locations up and down the UK, continued for a period spanning almost 40 years, many of which are still in use today.

Archie, as he was more generally known, was born on 27th April 1865 in Camlachie, a district on the eastern side of Glasgow. Educated at Hutcheson’s Grammar school, and subsequently at Anderson’s College, he left in 1882 to join the engineering company of Duncan Stewart & Co as a trainee draughtsman.

After qualification and further training in marine engineering, he travelled extensively to India, South Africa and numerous other locations, keeping a passion for travel for the rest of his life.

In 1890 he married Jessie Black, the daughter of a dairyman and they were to stay together for almost 50 years until his death.

Archie’s first design (as previously outlined) was for his beloved Glasgow Rangers FC (see image). To show his devotion to the club he charged no fee for the work undertaken.

In 1902 during a Scotland v England international at the ground, part of the south-west terracing collapsed, resulting in the deaths of 25 supporters and 516 injuries (now referred to as the Ibrox disaster). Leitch immediately put the blame on timber merchant, Alexander MacDougall who, contrary to instruction had used inferior timber and joints for the structure. MacDougall was subsequently cleared of all blame at the trial, but Rangers continued to use Leitch as their consultant engineer on the stadium rebuild.

From this first design, Archie went on to become the foremost football ground designer of his generation, being responsible for stands at such stadia as Liverpool’s Anfield, Aston Villa’s Villa Park, Manchester United’s Old Trafford and Fulham’s Craven Cottage (see image) to name but a few. In fact, he went on to design more that 20 stadia in the period between 1899 and 1939.

A list of football grounds he worked on, along with images, can be found at Nicolas Jansberg’s Structurae website :
http://en.structurae.de/persons/data/index.cfm?id=d006772

His designs were generally thought of as more practical than fancy, although close inspection to the detail of such structures, would give an alternate view. Typically, one of his designs would incorporate a two-tiered stand with a large central roof span and a distinctive pediment. It was thought that he worked on a formula stating for every one person seated, two could stand.
His first design in England was for Sheffield United at their Bramall Lane ground. The John Street Stand incorporated a large mock-Tudor press box along with capacity for 9.000 fans, a third of which were seated.

In the wake of the Taylor report and the move to all-seated stadia, many of his designs have now been demolished for re-development.

After leaving a declining Glasgow for Liverpool in 1909, Leitch again moved, in the early part of the First World War, to London where he stayed in practice for over 20 years. In 1936, he retired from the business, leaving the running to his son, Archie Junior, who had become a partner in 1927.
Archibald Leitch died on 25th April 1939 and was buried in the family plot at East Sheen, near to Richmond-upon-Thames. He will be remembered as the premier football ground and stand designer, not only of his generation, but possibly of all time.